To the Moon and Back to Basics

This article addresses the largest point of contention from the facebook discussion which occurred leading up to the Aether Revolt points changes. The point of contention is whether Back to Basics, Blood Moon and Magus of the Moon should collectively be given a point.

I went through the thread and counted the number of unique people on both sides of the arguement, including the unique 'likes' (metadata in full swing! :P). Both sides were large enough that the contention is worth addressing.

Non-basic lands are unavoidable in Highlander. The more value/dual lands you play, the higher the average power of your cards, and there isn't enough non-basic hate to punish you often enough to stop playing them. This gives B2B/Moons a 'keep them honest' effect on the format. Cramming your deck full of non-basics is a little like jaywalking; it gives you an edge over fellow pedestrians but if you don't look for cops (Blood Moon and Back to Basics) down the street (metagame), you might get fined.

The effect that B2B/Moons have when cast range from 'nothing' to 'cripples the opponent's mana'. The later outcome makes B2B/Moons powerful and has put them in the points spotlight. The former is often overlooked and can lose the game for the B2B/Moon player. How often these two extremes happen, depends on people's willingness to play around them. There is also everything in between. In that middle ground, the B2B/Moon needs to do a lot of work to overcome its cost: a card, three mana and a lower power deck in general from playing two colours instead of 3, 4 or 5.

B2B and Blood Moon are also difficult to tutor for compared to creatures, lands and artifacts. This means that building your deck around them is a far greater cost because you see your pay-off cards much less often. Magus of the Moon is easy to tutor but also easy to kill.

HOW FAR DO PLAYERS NEED TO GO TO PLAY AROUND B2B/MOON?

When I asked myself this question, the first thing I did was create a rough table of Highlander mana bases. It really showcases how crazy good fetchlands are (too good imo). Keep in mind that I assumed a minimum of one basic land for each colour and two basics for each colour with double costs:

Not sure how clear that table is going to turn out on everyone's screens...it doesn't really matter. I just thought it was cool.

I know my land count preference is a lot higher than other people. I've assumed a minimum 25 land deck in the table. Things aren't that simple, obviously, e.g. I consider Preordain a land if I already have enough blue sources. I also think those >26 land decks in the table are at risk of flood unless they have lots of mana sinks.

How much to play around B2B/Moon is all about percentages. You just gotta pick a percentage that you're happy with. Here are some thoughts to consider, hopefully they help you identify your percentage:

The odds that your opponent has a Blood Moon or Magus of the Moon in play on turn three is about ~29% (using this calculator). If you're playing four fetches and a basic of a colour, you have a ~59% chance of access to a basic of that colour before a moon rises; ~34% chance of getting two different colours and ~20% chance of having three colours. These are all rough number of course, since play/draw is a factor, as are cantrips and fetches which find two basics you want.
In general you can say that you're likely to get two different coloured basics before the moon rises and if the other colour you're playing is red, then you have access to three of your colours. The more basics you play, the higher your percentages.

Back to Basics is a different and typically stronger effect than Moon despite retroactive fetch lands still working. To progress your game against B2B you'll need basics/non-land sources equal to the CMC of your spells, rather than just one of each colour. The lower your curve, the better against B2B.

When you've finished your match, walk around the room and watch some other matches. Highlander is not only fun to watch but you can also identify which players are on B2B/Moons. Those decks are relatively slow, so there's a decent chance they're still playing. If you face them you'll know to fetch basics game one.

After game one, if you demonstrated that B2B/Moon does nothing against you and you see them siding out a significant number of cards, you can assume that they're boarding out B2B/Moons. This gives you the luxury of fetching more aggressively for dual lands game two. Beware of them bringing B2B/Moons back in game three though.

Wasteland is a non-basic hate card which is pointed, that's a precedent. However, Wasteland does not put the heavy restrictions on its player that B2B and Moons do. It can also screw opponents as early as turn one, giving them less time to resolve mana creatures and mana rocks, e.g. Signets.
Counterspells, removal and discard also do not work against Wasteland like they do B2B/Moons.

OTHER SMALL DOWNSIDES TO B2B/MOONS

THE DIFFERENCE BETWEEN B2B/MOONS AND POINTED CARDS

Looking at pointed cards on the list, almost all these are good no matter what the opponent is doing. Oath of Druids is the exception to this but a two mana Griselbrand on turn three is much stronger than locking down a couple lands turn three for three mana.

ARE THEY GOOD FOR THE FORMAT?

What's important is enjoyment. Being locked under a B2B/Moon is not fun but you chose to be weak to those cards; Similar to a creature deck with no fliers or enchantment removal trapped behind a Moat. B2B/Moons create decisions during deck construction and play; The tension between fetching for the 'best mana' verses playing around B2B/Moon is good because it creates dynamics and decisions, which is interesting (compared to everyone playing a minimum three colours with lots of doubles).

B2B/Moons create natural rotation, which is great for any eternal format: 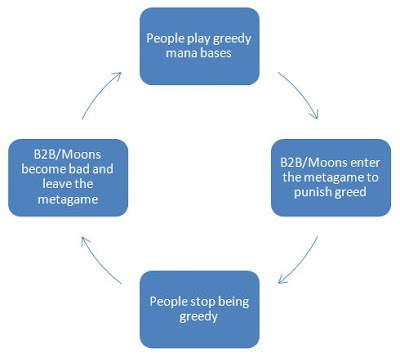 See you on the glorious field of battle,

Mulch
Posted by Luke Mulcahy at 03:51

Luke Mulcahy
This is where I dump my Magic the Gathering ideas. I love the game and want to share that love. Let's go to the Pro Tour together!